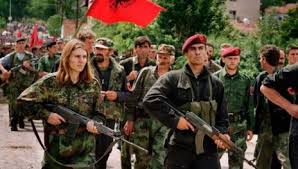 Adilim,  finally you found some to time to explain your generous donation to the Illyrian Liberation Army. You certainly have some explaining to do…

Well, I am aware that this last decision of mine has surprised a lot of people and lost me some friends, but believe me, I have good intentions. The Russian threat is real, everyone who lives in Eastern Europe knows that. People should stand against Russia’s aggressive stance or else they might lose their freedom.

Yes, but don’t you think that allying with an organization that blames the Slavs for the Black Plague,  WW2,  9/11 , the current economic depression and pretty much every other major disaster; is a bitextreme?

I understand what you mean, Krasniq. But my own experience has taught me some interesting things about world politics. Let us consider a simple example, the Arab-Israeli conflict. Everyone blames Israel for the Arabs’ current condition.  Most people never research such topics, and yet they already support one side. It’s very rare for the average person who lives in the other side of the continent to do their own research and then draw the conclusions. Most people do the exact opposite: they already have their own favorite side, and then back their position up with idiotic arguments. About 80 percent of the people I  know fall to the second category.  They are not always crazy people, actually most of them just don’t have the time and will for that stuff. For the average American who  thinks that Albania is located somewhere in Thailand, its easier  for him or her to believe some Anti-Muslim bigotry and think that Albanians are jihadis while Serbs are white-flag-weaving pacifists, instead of actually reading some history books. That’s the first strategy of converting people to your cause: oversimplification based on false information.

The second strategy is a bit more complicated. It’s all about irrationality.

“The grieving Palestinian mother was screaming as the IDF  jet bombed their bathroom and killed their beloved goat named Nakba. The goat had been the family’s only source of income, feeding an entire generation of freedom fighters.  The mother had lost all of her sons in suicide bombings and now she was completely alone. Desperate as she was, she took a handmade grenade and tried to throw it at an Israeli tank. An IDF infantry shot her dead just before she pulled the ring. The woman’s family buried her body and promised  to Allah that they would soon avenge her death.”

Over the top, isn’t it?  Well, it’s not. The average person who knows nothing about the roots of the conflict and all of his information is based on TV reporting would listen such stories very often. And they are true. People see that the Palestinians are suffering while the Jews are wealthy. According to them, the  incredibly hateful and lunatic Arabs must have some valid reason for being all crazy and mad. However, that’s not always the case. And people have trouble admitting that. They always try to rationalize the irrational and end up justifying hatred instead of ending it.

Albanians have suffered during the last century a lot more than Arabs have ever suffered in their entire history. They were expelled from Greece, Yugoslavia and their propriety was confiscated. Kosovars were constantly terrorized when they were under Yugoslavia. We had no Partition Resolution to blow away, never started a 6 days war either. And yet, there has never been any Albanian terrorism. No Albanian lives in a rat-hole just to kill some random Serb or Greek.

Now why are Arabs allowed to do this stuff? Why have they been so amazing at getting undeserved  attention?  Why are they the only people that are allowed to act like barbarians just because a country that they didn’t like much dared to declare its independence?

Finally you’re getting to the point. Why is that so?

Because they are pissed off, Krasniq. The more pissed off you are, the more will people listen to you.

This is why I donated 5 million USD to the ILA. If even Arabs are doing it in order to fight their imaginary problems, then why shouldn’t we Albanians who have real problems do it too?

Who is the Son of Eagles?

This website is dedicated to Adilim Gjernima, the American-Albanian teenage billionaire. Here you can find exclusive interviews and articles about him.