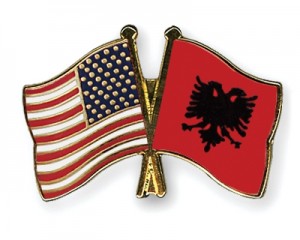 I was finally able to get Adilim to speak about his latest political project, the Albanian Americans for Progress (AAFP).

Mr Gjernima, have you written your party’s political program?

”Not yet, but I have some pretty elaborate ideas about the policies I am going to pursue. I believe that writing a program is not  nearly as important as having a vision. Every party in the world has a written program. Does that make them better ? No.”

Which is Albania’s biggest problem?

”Bad government. I think that every country suffers from this problem, but Albania is already poor, thus it cannot afford the adventures of some ambitious politician.

When I am elected prime minister, the first thing I will do is replace all government officials that hold positions of power, especially these ones who collect taxes. Not only will there be stricter anti-corruption laws, but I’ll also publish for the public a clear report of the total taxes collected and government expenses. If there’s anything missing…there will be hell to pay.”

That sounds nice, Adilim. But do you really think it’s enough?

”It’s not enough. Although 100% transparency is the goal I am striving for, there will be corruption if the government has a lot of control on the economy.

This happens in every country, but Albanian politicians have a peculiar tendency to steal even more.

I will solve this problem by decreasing the government’s size and by cutting taxes. The import tariff should go. It’s bad because it raises the cost of living and distorts the economic production. My friend’s computer and laptop business was ruined by it.

The sales tax, income tax and estate tax must go too. All they do is multiply the population’s financial problems.

Ah, there is something else: there won’t be any government subsidies for the economy. You either do it yourself, or leave it.

KESH will be privatized and it won’t be a monopoly anymore.”

On what areas are you going to focus?

”Law and order and infrastructure.”

Are you going to legalize drugs?

Who is the Son of Eagles?

This website is dedicated to Adilim Gjernima, the American-Albanian teenage billionaire. Here you can find exclusive interviews and articles about him.